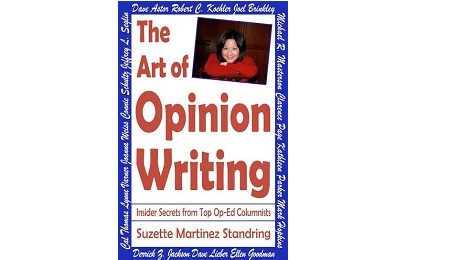 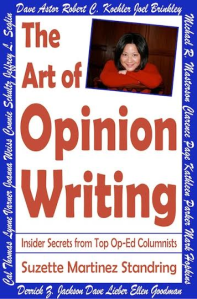 The National Society of Newspaper Columnists reports that a FREE two-day e-Book giveaway of The Art of Opinion Writing: Insider Secrets from Top Op-Ed Columnists by Suzette Martinez Standring is being offered Sunday, June 29 through Monday, June 30, 2014 on Amazon.com by its publisher, RRP International Inc.

No restrictions. No conditions. No Kindle required. So, No excuse for any writer to be without this indispensable book of insight, information and inspiration.

Not “Just” for Columnists

The Art of Opinion Writing goes behind the published page tapping into the veins of prolific columnists who have achieved journalism and Pulitzer prize awarded successes. Whether you’re an aspiring columnist, weekend blogger or writer of any style or genre, The Art of Opinion Writing bursts from its binding with anecdotes, advice and writing strategies that will improve the quality of your work.

It’s no wonder Standring’s The Art of Opinion Writing has been adopted in college journalism courses. With professional words of wisdom and works of accomplishment covering topics of sports, politics, consumer affairs, education, faith, ethics and pop culture offered by columnists such as Joel Brinkley, Ellen Goodman, Connie Schultz, Jeffrey Seglin, Cal Thomas, Joanna Weiss and more, The Art of Opinion Writing compacts volumes of information into a single source itching to infiltrate your work.

To have access to the opinion (no pun intended) and insight of some of journalism’s top-notch, award-winning columnists in one place is equivalent to attending a private columnist coaching convention – priceless!

Yet for two days, you can download it FREE.

An Extra for Women Opinion Writers

Recent research reveals the sad statistical fact that there is a lack of female voices published on the opinion pages, “…and this presents an inaccurate picture of the world”, Dustin Harp reports in the study.

Perhaps The Art of Opinion Writing, written by and highlighting several successful female op-ed columnists will provide the tools of the trade, the techniques of the craft and the tenacity of women writers to break through that glass ceiling. But first you have to own the book then you have to read it – or better yet, devour its buffet like a wisdom-hungry opinion-writing savage, then put pen to paper, fingers to keyboard and properly and professionally voice your opinion.

There’s no doubt we all have an opinion. But there’s a distinct difference between soapbox sound off and professional persuasion. The Art of Opinion Writing will clarify that confusion and your writing.

So be sure not to miss this FREE two-day, time-limited opportunity to own the e-Book version of The Art of Opinion Writing: Insider Secrets from Top Op-Ed Columnists by Suzette Martinez Standring, available June 29-30, 2014 at Amazon.com. No Kindle, no problem. Just download the Free app and start reading on your device today.

ABOUT SUZETTE MARTINEZ STANDRING
Suzette Martinez Standring is a syndicated spirituality columnist with GateHouse Media. She holds first place for Online, Blog and Multimedia columns (circulation under 100,000) in the 2013 National Society of Newspaper Columnists competition. She teaches writers

workshops nationally, hosts and produces It’s All Write With Suzette, a Milton (MA) Cable TV Access writing show featuring guest authors and columnists. Her humor and op-ed columns are featured on Humor Outcasts and The Huffington Post. She is the award-winning author of The Art of Column Writing: Insider Secrets from Art Buchwald, Dave Barry, Arianna Huffington, Pete Hamill and Other Great Columnists (now in its second printing with new publisher, RRP International Inc.) She was a featured speaker at the 2014 Erma Bombeck Writers’ Workshop held in Florida, a past president (2004-2006) of the National Society of Newspaper Columnists, and a featured speaker at the 2014 National Society of Newspaper Columnists conference held Washington, D.C.

I’d say Suzette Martinez Standring is a voice and an opinion to tune into.